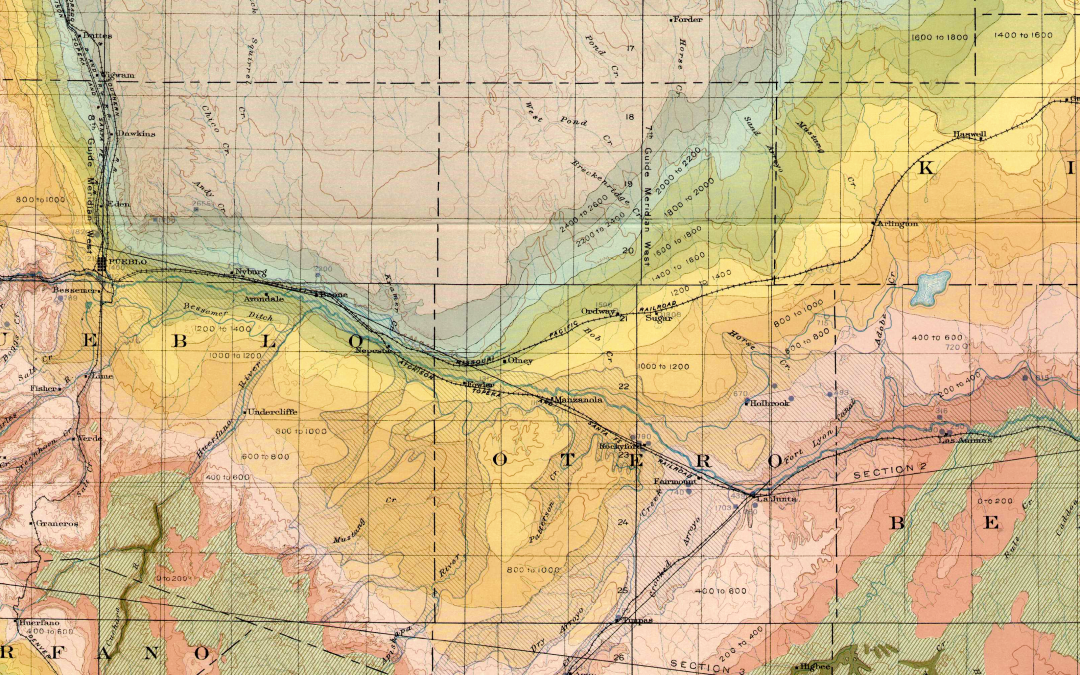 An ICS analysis of 1041 permitting practices across Colorado’s 64 counties begs the question: can this tool provide a mechanism to protect agriculture, restore natural systems, and more equitably apportion the water we need?

Colorado faces a water constrained future. The Colorado Water Plan projects a 2050 municipal and industrial gap up to 560,000 acre-feet. It seeks to reduce this gap to zero by 2030. Simultaneously, it aspires to protect the health of watersheds, with 80% of critical watersheds having watershed protection plans in place by 2030. And it looks to protect agriculture and see “agricultural economic productivity keep pace with growing state, national, and global needs.” Without concerted action, the plan says, “Colorado could lose up to 700,000…acres [20%] of irrigated [agriculture].”

Agricultural economies and natural ecosystems have a lot in common. They are large and complex—filled with autonomous actors connected by a web of interdependencies. They function best at scale. One hundred acres of isolated grassland will not support species biodiversity, but 100,000 acres of contiguous native grassland will. Similarly, large agricultural landscapes create opportunities for “market life” that cannot subsist on isolated farms. Both agriculture and nature are susceptible to “death by small decisions”—usually witnessed as a series of market actions and land use changes that, at some point, affect the “whole organism.” Think urban sprawl. Think buy-and-dry.

The production of food, the health of the economy, and the protection of the environment are all matters of state interest. The State of Colorado has long been concerned with the trajectory of impacts that various land and water development decisions have upon agriculture, nature, and human welfare. In 1974, the state established the Areas and Activities of State Interest Act (AASIA), which imbues local governments with the authority to regulate land use matters of state interest. This authority is commonly referred to as a local government’s 1041 powers, after the bill that created the AASIA: HB74-1041. The rationale for the AASIA is stated in the legislative declaration (C.R.S., 2018, § 24-65.1-101):

Drought, climate change, and the pressures imposed on local land and water resources by both regional and global market forces—population growth, land conversion, water speculation—make it imperative for local governments to understand how 1041 land use authority can be employed to effectively navigate the forces of change.

1. Areas containing, or having a significant impact upon, historical, natural, or archaeological resources of statewide importance.

Through their 1041 powers, local governments have the authority to regulate water development projects to address local needs and prevent or mitigate injury, including economic injury. We typically see 1041 powers being used to regulate construction projects (dams, pipelines, etc.). It is less commons to see the more systemic economic, land use, or environmental impacts of water development projects being regulated effectively. This is probably so because these impacts have been more difficult to quantify. Regulators often have to rely on the information provided by the applicants themselves.

Most local governments have a long way to go, if they are going to align 1041 practices with the aspirations identified in Colorado’s Water Plan and the AASIA. Many cities and counties haven’t adopted 1041 regulations to guide water projects. Those that have often have ambiguous or outdated code. Even when code is well articulated, it can be difficult to administer. Elected officials serve a quasi-judicial role in approving or denying 1041 permits. Usually, the officials who were involved in writing the code are not the ones in office when it comes time to oversee implementation of that code and enforce its standards. A basic understanding of constitutional property rights law, land use law, and water law are needed to effectively oversee 1041 permitting processes; but 1041 trainings don’t exist. 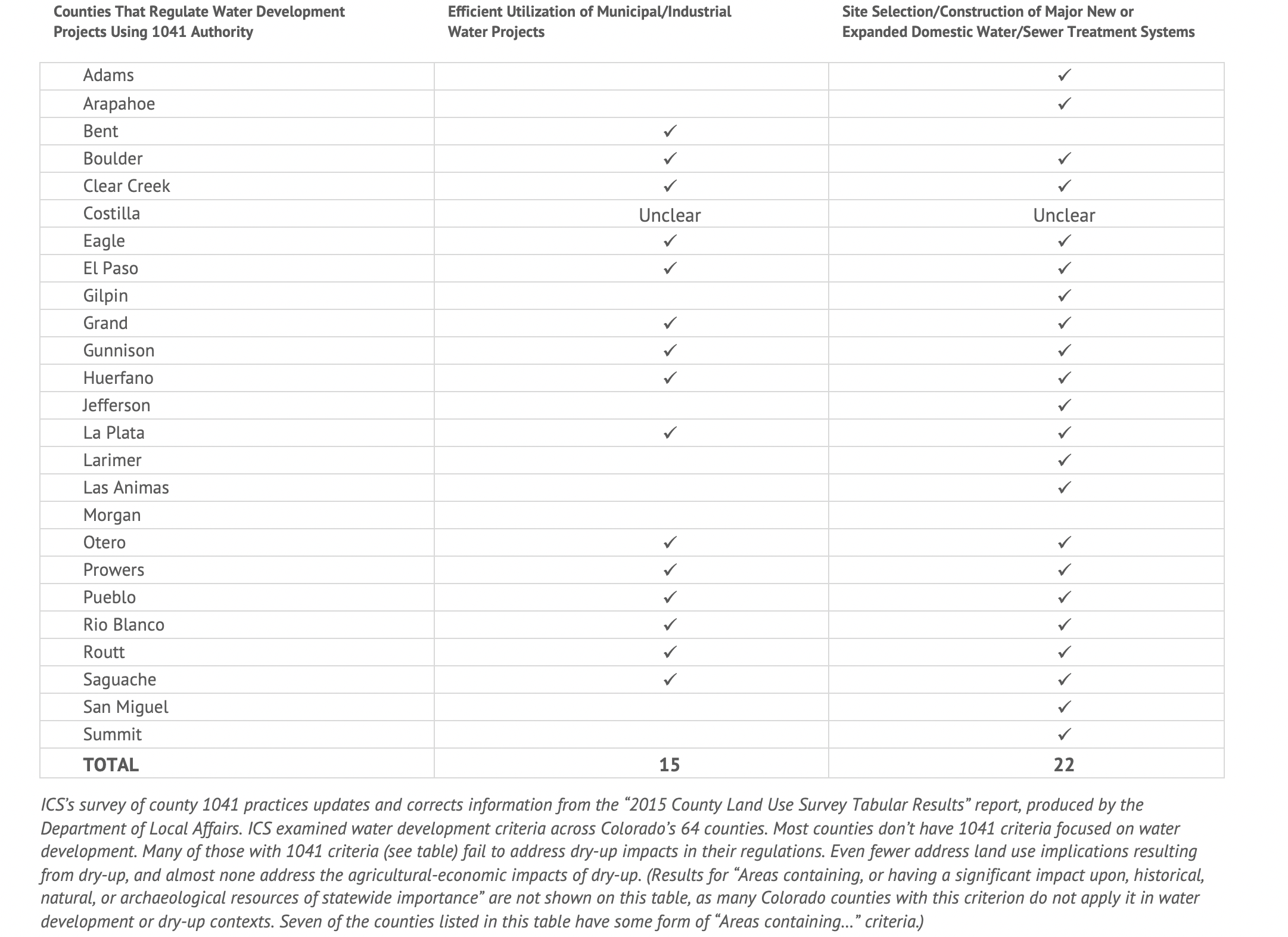 How water is used in Colorado is going to change. Climate and market forces are going to drive that change. Agriculture has the largest supply. Markets are going to exert pressure to move that supply to where the demand and price are highest. Are Colorado’s agricultural counties poised to address this challenge and protect their citizen’s interests? Can they maintain freedom in the marketplace while eliminating the zero-sum games that sometimes result from wholesale water transfers? What would the implications be if 1041 criteria were used more widely and effectively?

Since the early 20th century, the development of agricultural water rights for municipal and industrial uses has relied on willing-buyer, willing-seller transactions in locations where export and transport are feasible (some ditches and irrigation districts prohibit out-of-ditch exports; sometimes the transport of water from one location to another is not feasible). But the scale of dry-up impacts has grown significantly over the last 50 years, resulting in fragmented landscapes, declining agricultural economies, reduced biodiversity, hydraulic challenges for ditch companies, and fiscal and land use challenges for local governments. Willing-buyer, willing-seller approaches may benefit cities and sellers, but they do not support the strategic objectives of the AASIA and the Colorado Water Plan.

The Water Plan advocates for change—including alternative transfer mechanisms (ATMs) that attempt to obviate the zero-sum games of agricultural water appropriation practices through water-sharing approaches. State statutes enable a variety of ATMs, including augmentation plans, interruptible water supply agreements (IWSAs), rotational crop management contracts (RCMCs), and agricultural water protection water rights (AWPWRs). But adoption has been slow. Why? Sometimes the reason has to do with cost. Sometimes it has to do with complexity. Sometimes it has to do with uncertainty and risk. But, most often, it has to do with path dependencies. We are a species of habit, and we do things a certain way because that’s the way we’ve always done them. Large institutions in particular (be they utility companies or mutual irrigation ditch companies) are often challenged to advance new models because they have so much investment in a “business architecture” designed to address the costs, complexities, and risks inherent in an existing way of doing business.

With effective 1041 criteria, local governments can accelerate the adoption of best practices—discouraging certain types of water development projects and permitting those that advance multiple-benefit outcomes, which protect their citizens’ interests. Consider three 1041 “efficient utilization” requirements that—if thoughtfully codified in detail, with nuance based on local conditions and circumstances—could advance Water Plan objectives and result in better economic, land use, and environmental outcomes for local communities:

ECONOMICS. “The applicant will protect agricultural economic outputs and the growth potential inherent in the local agricultural industry.” (This would encourage water-sharing approaches and discourage buy-and-dry tactics; it would promote investment in new or alternative agricultural enterprises when dry-up occurs.)

LAND USE. “The applicant will provide for the planned and orderly development of land and water resources and ensure compatibility between land use types in accordance with the comprehensive plan.” (This would discourage or require remediation of landscape fragmentation resulting from market-based water-development approaches that don’t take land use impacts into account; it would ensure future land uses are compatible with agriculture and nature.)

These sample requirements draw from code in a handful of counties with exemplary efficient utilization requirements. They meet 1974 AASIA purposes while addressing timely 21st century needs. Furthermore, they advance requirements and outcomes that, today, can be quantified with analytical models that were undreamed of in 1974. Sometimes the farsighted intentions of legislative actions and state plans take time to achieve. By linking AASIA practices with the aspirations of the Colorado Water Plan, we can approach land use and water managment planning in ways that are more visionary, integrated, equitable, and sustainable.

For an example of 1041 policy guidance using outcomes-based analyses, see the ICS report: The Economic Impacts of Dry-Up on Colorado’s Bessemer Ditch.

To inquire about help developing or administering 1041 criteria, contact us at [email protected]

This ICS article was produced for the Rocky Mountain Land Use Institute’s (RMLUI) 2022 Western Places | Western Spaces Conference and the RMLUI Seminar Series: The Colorado River Crisis—Connecting Land & Water Use for a Thriving Future.