A Western River with too Much Water? ICS Explores 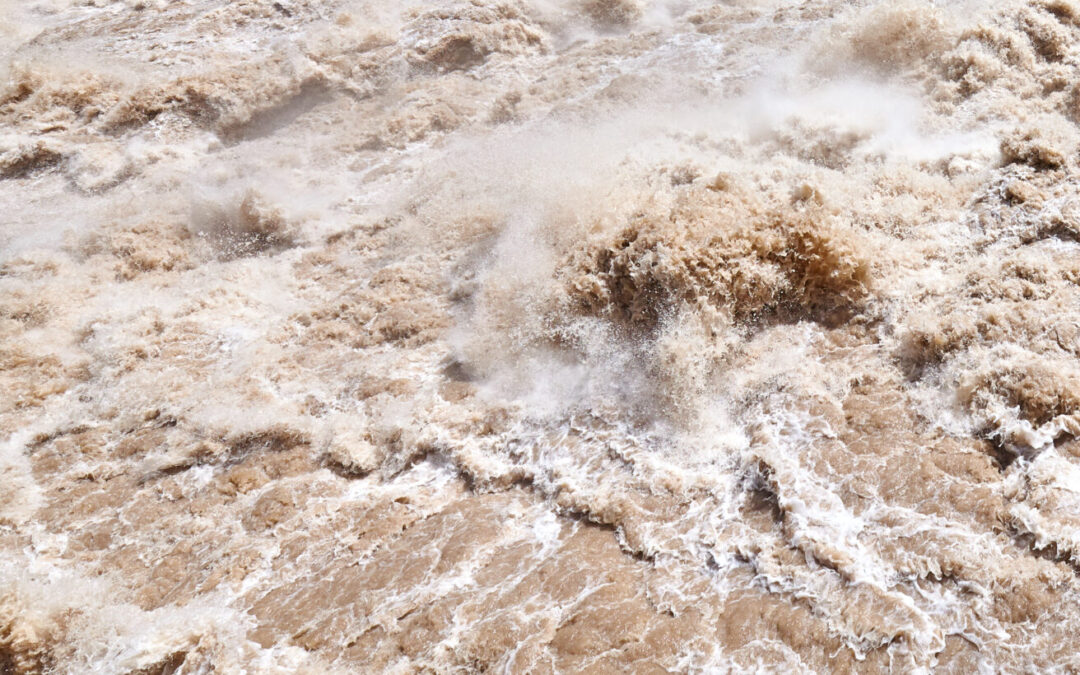 Can it be, in the midst of drought, with intense competition for limited water supplies, that a major tributary flowing through one of the Intermountain West’s largest, fastest growing cities, has too much water?

Descending an incredible 9,475 vertical feet in just 74.5 miles from tributary headwaters on Pikes Peak to its confluence with the Arkansas River in the City of Pueblo, Fountain Creek bisects the City of Colorado Springs. Observed from the heart of downtown, it looks like a major water course, and at flood stage it is. But Fountain Creek used to be ephemeral: dry in different places at different times of the year. Today, it’s perennial, with three times more water flowing in it than flowed there historically. And that’s not a good thing.

Unlike Denver, Fort Collins, or Pueblo, which developed around major river systems—the Platte, the Cache la Poudre, and the Arkansas—the City of Colorado Springs, which is projected to become Colorado’s largest city within two decades, did not develop proximate to a robust array of local surface water supplies. The growing city derives the majority of its supply from rivers on Colorado’s Western Slope, importing water through a series of transbasin diversion, storage, and conveyance projects. Other communities in the Fountain Creek Watershed—the 927-sqare-mile hydrological basin that surrounds Colorado Springs—share a heavy reliance on imported water, and groundwater as well. But where does all that imported water end up? Not just in people’s taps, but in Fountain Creek.

In the Fountain Creek Basin, there is a correlation between water demand and increased creek flows. It takes 1.0 acre-foot (AF) of imported water, on average, to serve two single-family homes for one year. 0.6 AF of the water used in those homes goes down the drainpipe and, after treatment by sewage plants, is discharged into Fountain Creek as “new water.” The impervious surfaces created by those homes and the infrastructure that serves them creates 0.25 AF of additional flows into Fountain Creek in the form of stormwater runoff. So today, for every 1.0 AF of imported water, 0.85 AF is added to the Fountain Creek system. Accordingly, an average of 110,000 acre-feet per year (AFY) flows down Fountain Creek today compared to 38,000 AFY prior to 1970, and even small rain events produce much greater flooding than they did historically due to expanding impervious surfaces.

It takes 1.0 acre-foot (AF) of imported water to serve two single family homes for one year. For every acre-foot imported, 0.85 AF is added to Fountain Creek. 0.6 AF of water used by those homes becomes treated sewage, which is discharged into Fountain Creek. And every two new homes (and the infrastructure that serves them) create impervious surfaces that add 0.25 AF of new stormwater runoff into Fountain Creek as well.

Why is more water in the creek a bad thing? 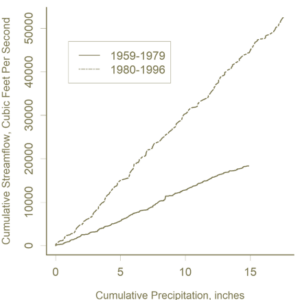 The simple answer is that the geology of the area cannot handle the increased flows. Loose, sandy soils define the region. Erosion has cut hundreds of banks. Cut banks disconnect the creek from floodplains. Floods become much more devastating. Sediments from erosion and flooding release dangerous contaminants such as selenium and arsenic. The cost to repair the damage in Fountain Creek is already well over $1 billion—and this does not count the costs to human life, health, and property that continue to accrue or the costs to address the causes of the problem.

So what’s to be done?

The key, as difficult as it sounds, is to address the root causes. This means uncoupling the relationship between water demand, which is driven by growth, and increased creek flows. To do this, Colorado Springs and surrounding communities—whose populations are some of the fastest growing in the state—will have to embrace three principles: reduce overall water use, increase water reuse, and capitalize on green infrastructure and low impact development opportunities. Reducing water use and increasing water reuse (recycling water as many times as possible, at a variety of scales—from the household to the utility scale) means less water is sent “down the system.” And green infrastructure and low impact development means stormwater is treated onsite and absorbed into the ground rather than running across impervious surfaces as sheet flows going straight into a river system that nature didn’t design to handle those flows. 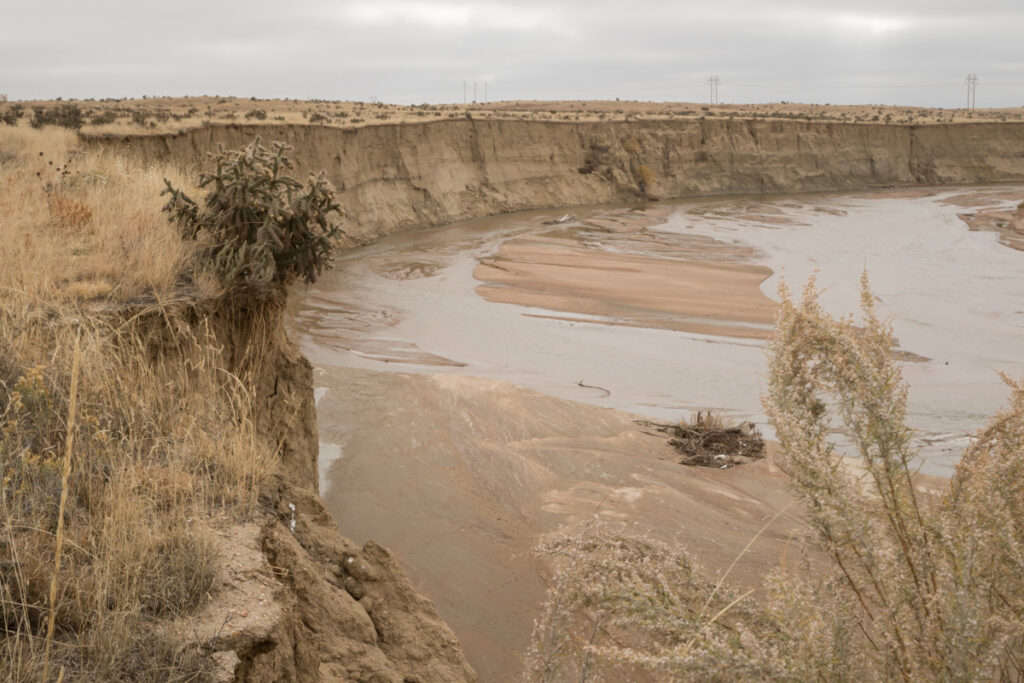 This fifty foot bank exists where a county road between Colorado Springs and Pueblo used to lie. The bank began eroding in the late 1970s, when water imports started producing higher base flows and expanding impervious surfaces contributed to higher peak flows. Banks like this disconnect Fountain Creek from its natural floodplains, which absorb water and mitigate flood damages. Accordingly, each subsequent flood becomes all the more devastating. Repairing this bank will cost $5.6 million. It is one of 215 identified bank stabilization projects south of Colorado Springs. Photo © Denise Dethlefsen.

Can it be done?

Yes, but not overnight. In the Fountain Creek Basin, it will mean course-correcting 100 years of water management history while addressing complexities in state and federal water law. An ICS-led team of scientists, policy analysts, and program managers from The Nature Conservancy (TNC) spent a year studying restoration needs in the 927-square-mile basin and determining how to navigate these issues. One key action to guide future endeavors will be the development of a stream management plan that helps basin stakeholders determine (and agree to) the combination of demand management, water reuse, hard infrastructure, green infrastructure, and floodplain restoration activities required to stabilized this highly unbalanced system. Colorado’s Water Plan calls for developing stream management plans on 80% of rivers and streams identified as basin priorities by 2030. Fountain Creek is an Arkansas River Basin priority. The  Colorado Water Conservation Board (CWCB) provides funds to develop stream management plans. It allocated $5 million for stream management planning efforts in 2017, and TNC is helping Colorado communities tap into these funds and launch planning efforts.

Numerous basin stakeholders—including state and federal water experts, water engineering firms, and NGOs—believe a CWCB-funded stream management plan, and the scientific studies that support it, can drive consensus for collective actions to restore the watershed. And there is more to do than just fix the altered hydrology. The Colorado Water Plan calls for stream management plans not only to assess existing hydrological and geomorphological conditions and prioritize management actions to achieve measurable progress toward improving flow regimes; it also calls for developing recreation opportunities, restoring habitat, and improving other physical conditions around the creek. These are critical needs in Fountain Creek, which is, today, a heavily degraded urban waterway throughout much of its course.